My partner Amalia and I almost died in Panama about two years ago. We had a kayak sink on us in the ocean about what seemed as if a mile away from shore. The story below is of our account, written by Amalia and was published in STAY WILD magazine earlier this year.

Since this event life has been different for me, I remember wanting nothing but to just get to land, I did not care for anything but just to be alive, To stay here in this journey called life. As fucked up as it is at times, life is sure something rather than nothing and when it really is truly threatened and in your face, a great weight seems lifted wherein the experience just to breath in cool air or drink water seems a gift beyond measure. Every day now I keep this memory with me, that no matter what happens, We made it back to shore.

I am glad I am here and I am glad you are here too :). Please enjoy the story below 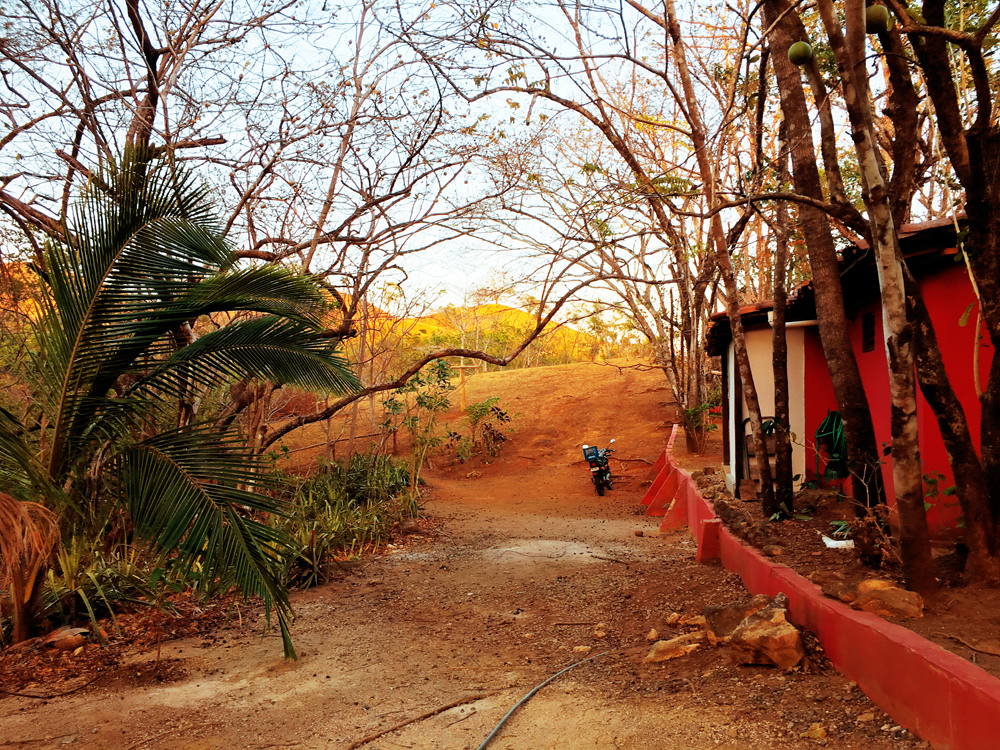 WHAT COULD GO WRONG?

Dry and dusty, this remote beach and the few hostels that spotted
its shores would become our home for the next two weeks. Howler monkeys assaulted our ears with guttural screams as they perched in mass close in the tree branches above our morning coffee and toast. Time obscured into a million moments spent lounging in hammocks, keeping my tender toes out of reach from the scalding sand. We snorkeled the colorful reefs. We enjoyed afternoons sunbathing with iguanas. We cooked rice and drank fresh juice from Martian-looking fruit. And we weren’t alone. Like-minded travelers migrated to and from the arid surfing outpost to catch the hefty wave break, and to escape the development of modernity; they welcomed us into their small community of internationals and locals alike, eating our dinners together under grass-thatched roofs. At night we watched wide-eyed as the sea lit up neon blue with its bioluminescent plankton.

It was our second day at Playa Venao. I eagerly persuaded my partner Eatcho to take a
break from beachside relaxation to enjoy a day of ocean kayaking. I promised a quick jaunt out into the bay, and a return soon thereafter. Eatcho was reluctant. His hesitation inspired me to push the idea harder. 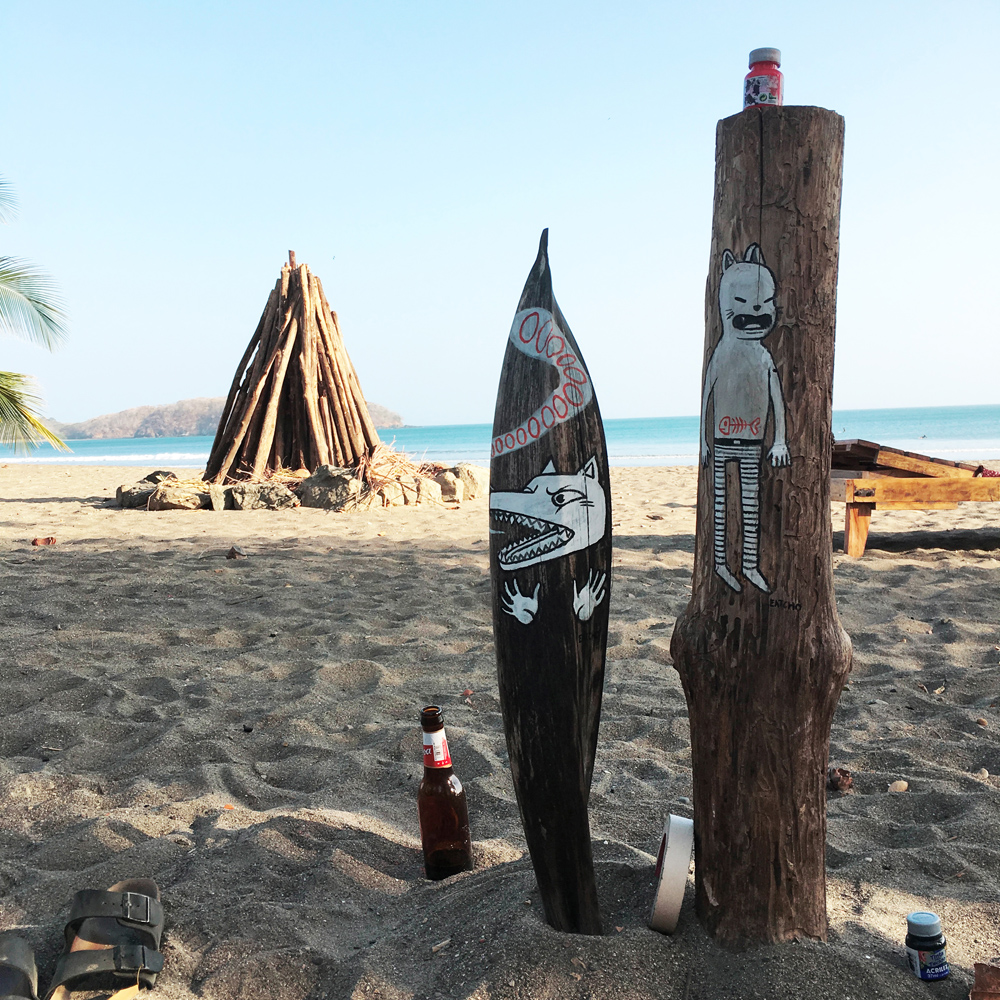 What could go wrong? What, indeed.

Our feet made funny swooshing sounds in the sand as we stumbled to the neighboring hostel to rent our kayak. Without instruction (or life jackets), we hauled our custard yellow craft to the water. We trusted our dessert-colored vessel without hesitation, and found ourselves paddling out to sea against the high tide.

Within twenty minutes we reached the edge of the bay and gazed out into a vanishing horizon of ominous dark blue. The vastness of the open water felt daunting.

After moments of serene awe, we decided to head back to the beach. As we turned the kayak on its heels, we became parallel with the waves. With one hefty blow of salty sea, we began to sink. The ocean rushed into our kayak with rapid fury, swallowing us whole; in mere moments we were left treading water, our yellow vessel bobbing with increasing depth below our flailing feet. 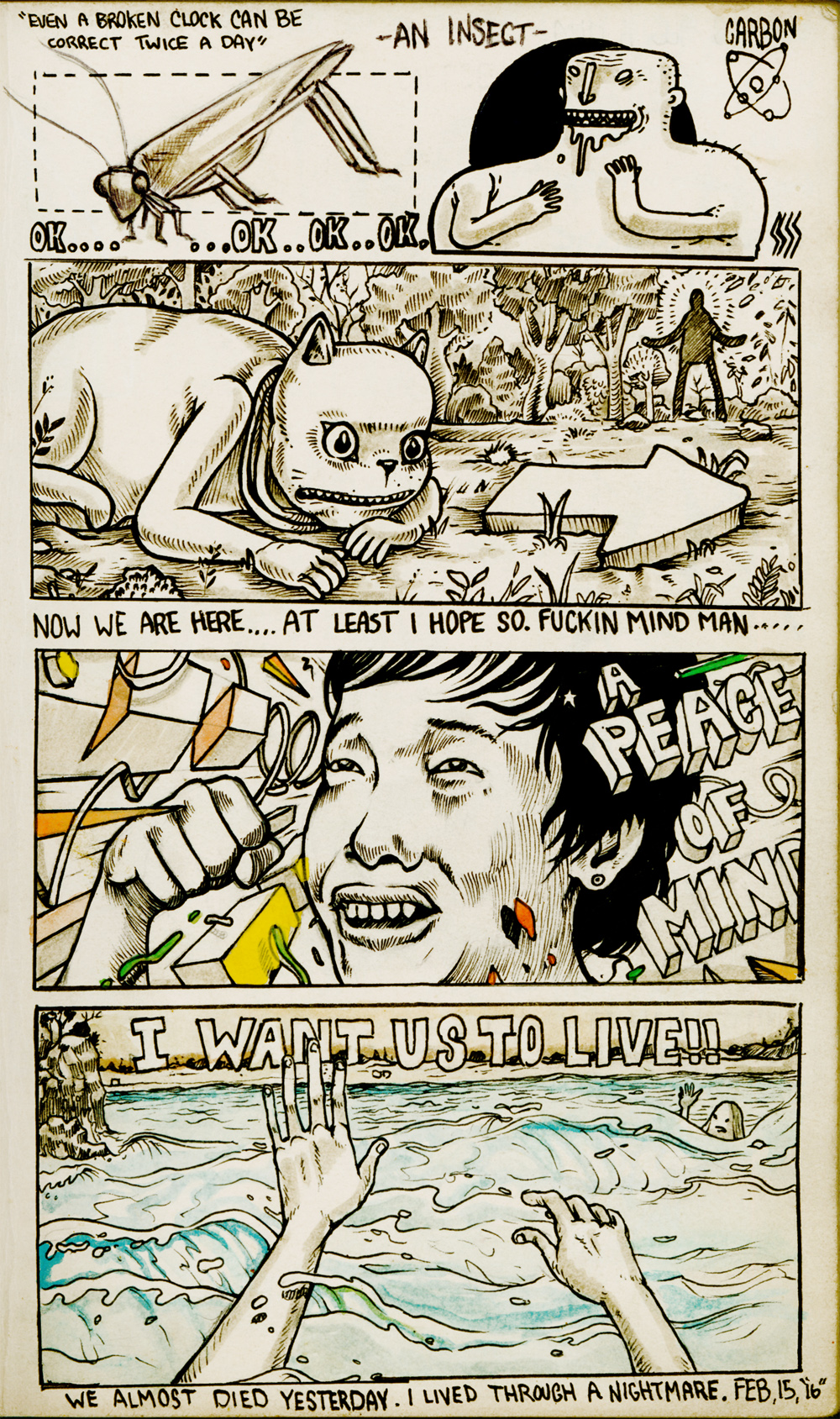 And then came shock. And disbelief. And overwhelming fear, without control. As we treaded water and tried for an instant to revive our sinking kayak, we cried out loud sentiments of WHAT THE FUCK–draining our lungs of air. Our cries lost their gusto as the reality of our situation sank heavily into us. We threw out inarticulate gasps at one another, hoping to stop time for long enough to catch our wits (or at least, to catch our breath). Instead, we were greeted with adrenaline—unsophisticated, but with enough aim to clarify our survival strategy. Abandoning our sinking ship, we swam.

And we swam. And we swam. We swam against the tremendous pull of the current, contradicting our every stride. Our voices became hoarse and our stomachs sour as the unforgiving waves forced salt down our throats. The shoreline was visible, although only as a vague belt of beige sand obscured by the tide tumbling in and out of our vision. Exhaustion took hold.

We swam, with terror and little choice, through a school of jellyfish. Wrapping around
our arms and legs, one jellyfish slapped me in the face, adding stinging insult to injury.

The beach didn’t seem to be getting any closer, and desperation set in. Eatcho is a poor
swimmer, and as time passed, hopelessness got the better of him. Treading water next to me, my dear love began to spit sonnets our life together, trying to say goodbye. I screamed at him to shut up and save his oxygen. How did we mess up THIS bad? I rolled onto my back, catching enough breath to curse my former self. Go kayaking, I said. It will be fun, I said. What could go wrong, I said.

After 3 hours and well over a mile of open water, we made it within striking distance of the shore. The closest point to us was the northern tip of the mainland, an jagged cliff face surrounded by large mollusk-covered rocks. The sea’s high tide churned around them with a mighty wake, swelling up and down and over. Like a stew, the seawater smashed and groaned, creating a thundering current between the sharp rock mounds and the mainland.

We followed the upward swell of a wave and came crashing down on the nearest rock
mound. The tide dropped, and our soft, fatigued bodies ground down the jagged razor-sharp mollusks. It shredded our front sides like cheddar to a cheese grater. Blood poured from our new cuts, wretched deeply across our shins, knees, thighs, stomachs and the tight tendons between our fingers.

Finding our grip, we climbed to the top and clung—shaking, bleeding—to the first bit of land we had felt in hours. Rejoice at our success lasted for a brief but distinct moment, interrupted by exhaustion and the even more sobering task of jumping back into the water once more for a final push to the mainland. 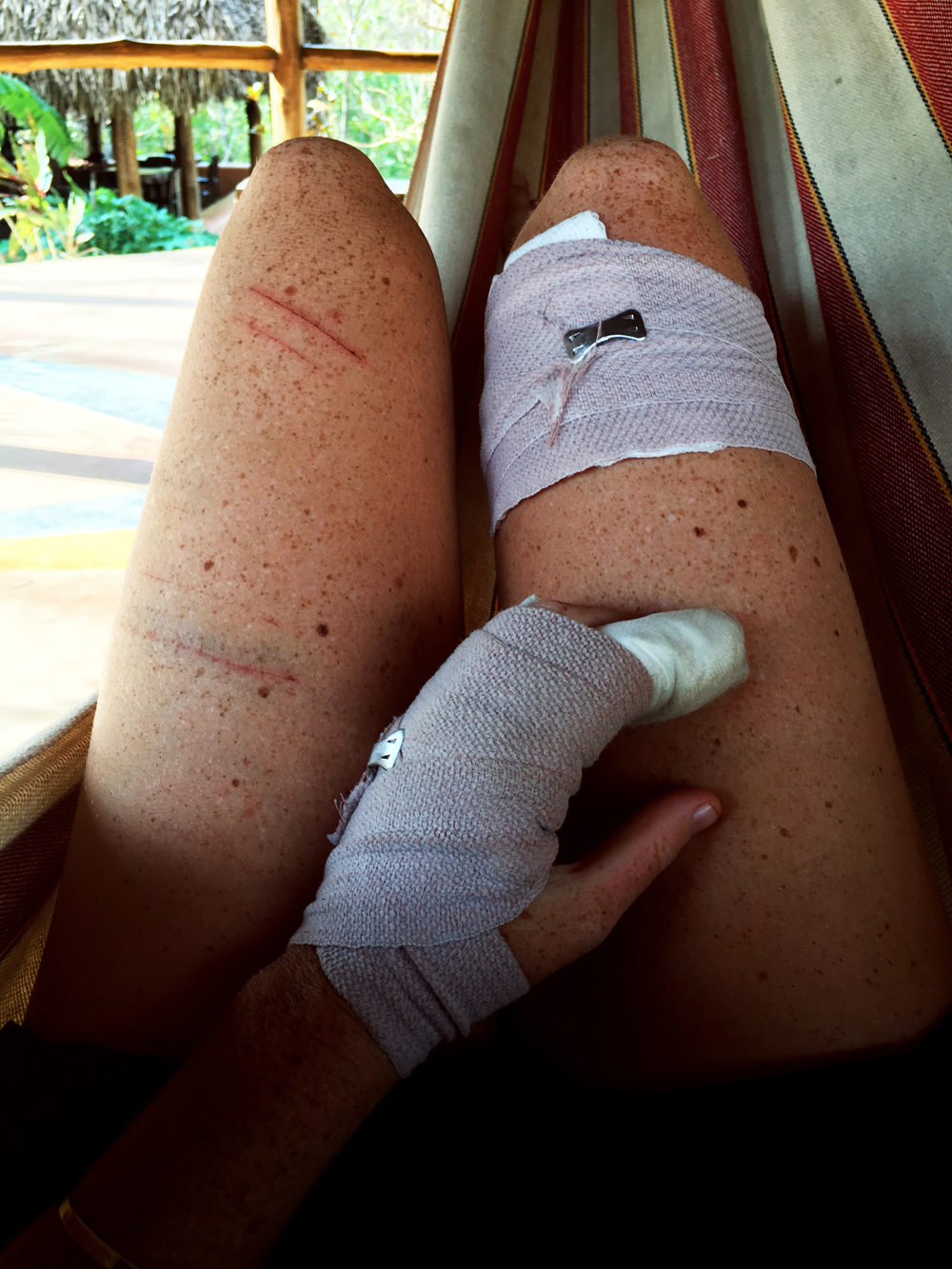 It took us a very long time to move—perhaps an hour. Fearful
weeping came and went, and eventually we regained our ambition to intrepidly step across our sanctuary of mollusk and rock. My first attempt got me broadsided by a wave, knocked down into a harsh corner of current and cliff. My derriere now quite worse for wear, I climbed back atop my original position, and we tried once more to cross. Studying the tide, we jumped. 10 feet of swirling current later, and we hit rock face for a second time. Despite the odds, we made it.

Laughter, screaming and sobbing compounded. We walked for another hour through dusty deer trails and cactus-strew forest peaks. Eatcho paused every so often to politely release his severe diarrhea from ingesting so much seawater. Our bodies became streaked with crimson as our wounds poured out the evidence of our naivety. We stumbled back to the road home. 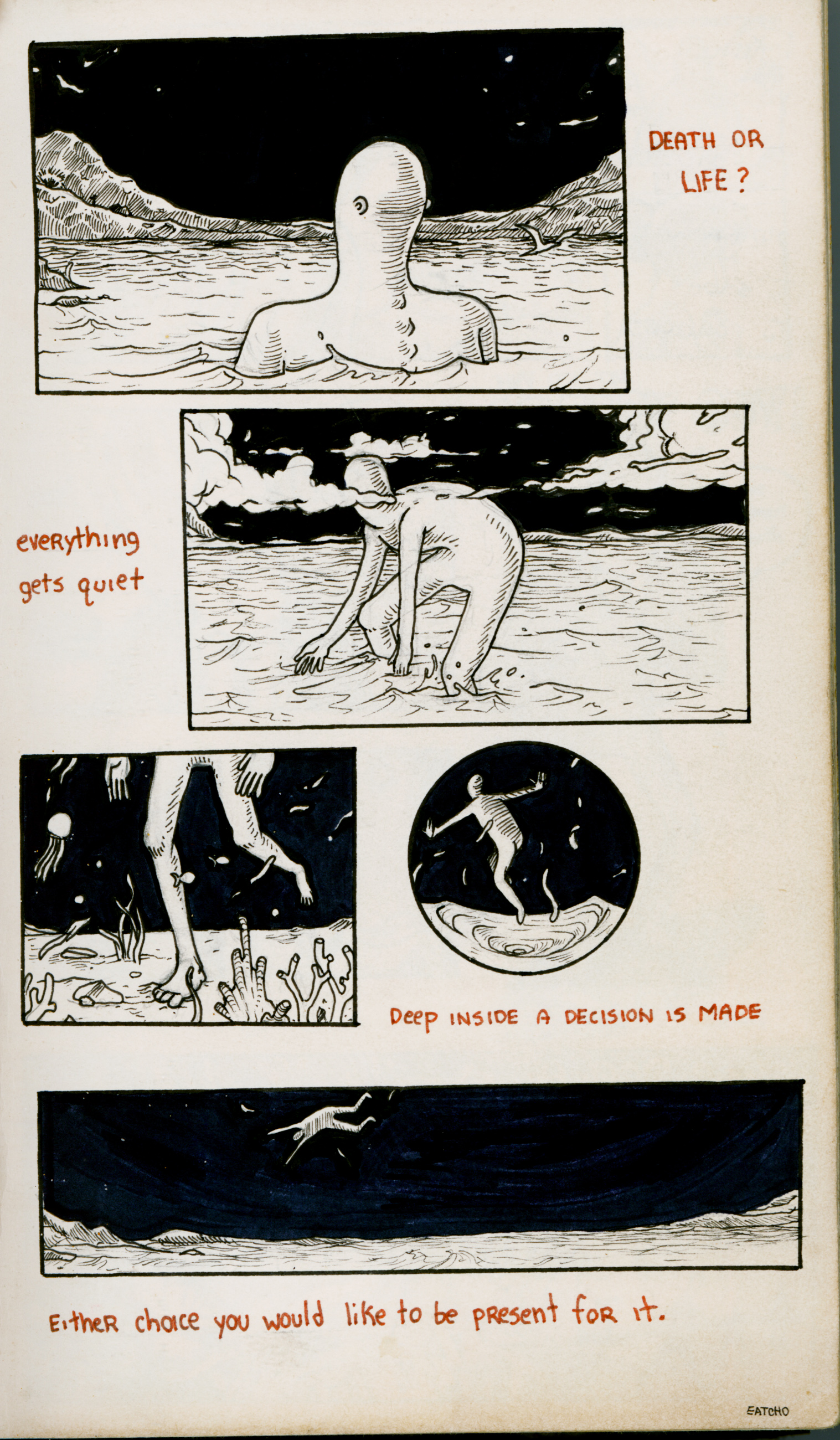 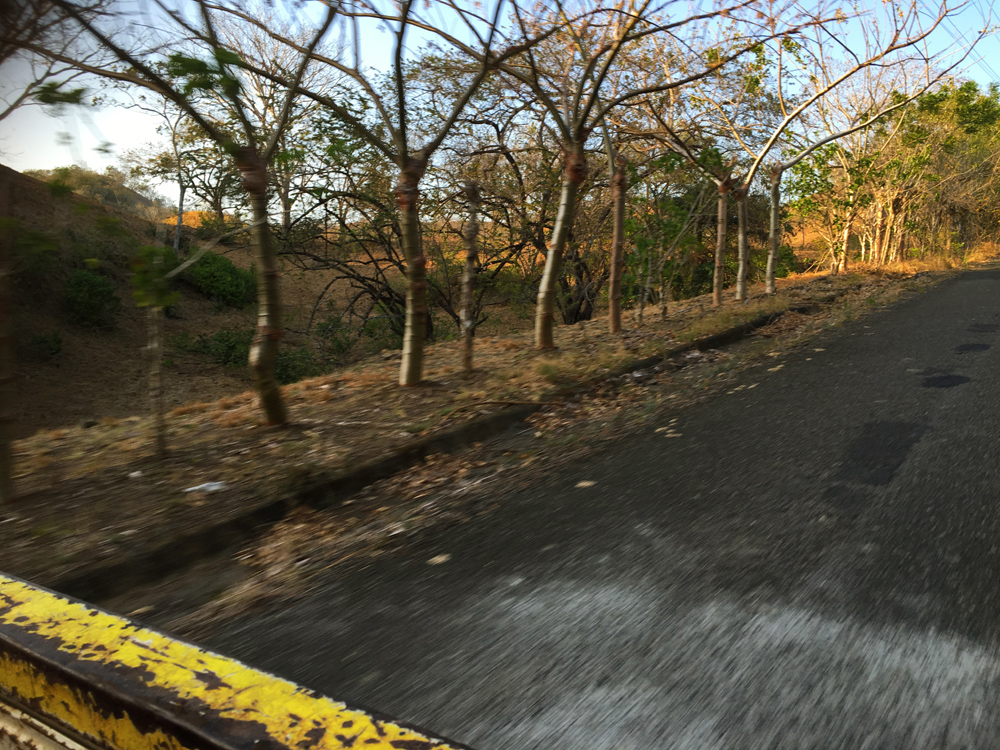 Thank you for checking it out!

2 thoughts on “Did I ever tell you when we almost died?”